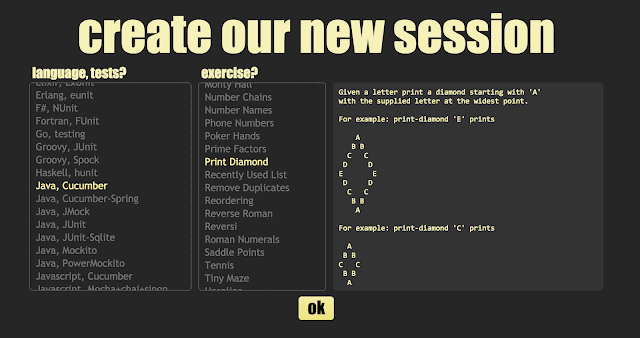 This page holds the choices where you select both your language+testFramework (eg Java,Cucumber) and your exercise (eg Print Diamond).

Note the curl simply expands to a list of git-repo URLs, one for each of the most common language+testFrameworks. Each git-repo URL must contain a manifest.json file.


Posted by Jon Jagger No comments:

creating your own server start-points

starting your server with your start-point


Posted by Jon Jagger No comments:

THE INFORMATION BELOW IS OUT OF DATE.
It will be updated properly soon.
Meanwhile, follow step 0 below, and then look at these examples from the cyber-dojo-languages github organization: Note how each repo's .travis.yml file simply runs the run_build_image.sh script which builds and tests the docker image and any associated start-point code. In particular the script augments the Dockerfile commands in various ways (eg adding users for the 64 avatars). Alternatively, if you are building your docker-image using a raw [docker build] command you must base your docker-image FROM a cyber-dojo-languages dockerhub image.


1. Create a docker-image for just the language

Repeat the same process, building FROM the docker-image you created in the previous step.
For example, suppose your Lisp unit-test framework is called lunit

Use the new image name (eg cyberdojofoundation/lisp_lunit) in a new manifest.json file in a new start-point.

Example: the manifest.json file for Java/JUnit looks like this:

The name of the docker image used to run a container in which cyber-dojo.sh is executed. Do not include any version numbers (eg of the compiler or test-framework). The docker image must (currently) contain a file called red_amber_green.rb in the /usr/local/bin directory. The runner service uses this to determine the traffic-light colour of each test run outcome. For example, here's the one for Java-JUnit.

The name as it appears in the start-point setup pages. For example, "Java, JUnit" means that "Java, JUnit" will appear as a selectable entry. A single string typically with the major name first, then a comma, then the minor name.

The extensions of source files. The first entry is also used when creating a new filename. Must be non-empty.

The number of spaces a tab character expands to in the editor. Must be an integer between 1 and 12.

Used on the dashboard to show the test output line (which often contains the number of passing and failing tests) of each animal's most recent red/green traffic light. Useful when your practice session starts from a large number of pre-written tests and you wish to monitor the progress of each animal.
An array of two strings used to create Ruby regexs. The first one to match a red traffic light's test output, and the second one to match a green traffic light's test output.
An example for Python, unittest.
Defaults to [ ].

Filenames whose appearance is highlighted in the browser. This can be useful if you have many "visible_filenames" and want to mark which files form the focus of the practice.
An array of strings. A strict subset of "visible_filenames".
Defaults to [ ].

cyber-dojo.sh may create extra files (eg profiling stats). All text-files created under /sandbox are returned to the browser unless their name matches any of these string regexs.
An array of strings used to create Ruby regexs, used by cyber-dojo, like this Regexp.new(string). For example, to hide files ending in .d you can use the following string ".*\\.d"
Defaults to [ ].
DEPRECATED. Instead, inside cyber-dojo.sh, use a trap handler to delete unwanted files. For example here's a trap handler for Ruby, Approval.

The maximum number of seconds cyber-dojo.sh has to complete.
An integer between 1 and 20.
Defaults to 10.
DEPRECATED.

running your own cyber-dojo web server