I was recently interviewed about the creation and use of cyber-dojo by Lancer Kind as part of his Agile Thoughts podcast series. The first two episodes are now up. Why not give them a listen!?
Cheers
Jon

Help! Download your session as a git repo in a tgz file?

Note: This feature is now implemented.

An upgrade to the way cyber-dojo stores its backend data is now live. It now uses a git repo for each individual session. This is partly so I can provide a [download] button which will give you a tgz file of your current cyber-dojo session, in git format, with a git commit for each test event. This will allow people to upload their sessions to github for example. However, I cannot get the download working though the nginx reverse proxy. Can anyone help, or know someone who could? Update - the [download] button is now implemented.

If you'd like to set up your own env and try to help you'll need docker installed: Thanks

When and why tag Docker images to :latest ?

When I work on cyber-dojo I do quite a lot of testing. To state the obvious, when testing you want to test the software as it actually runs, as it's actually released, as it's actually deployed, etc. As obvious as this is, it can be surprising how often a distortion occurs.

Note step 1 does not volume mount the code and tests. That would be quicker but would be a distortion.

Now, step 1 in a workflow such as this commonly tags the docker image to :latest and, if an image is actually deployed, retags it to something unique (eg the first 7 characters of the git commit sha) and publishes that image. This is another small distortion. The published image now has a different tag to the one used in step 4's testing.

A development loop such as this can quickly build up a lot of stale image layers. When you clean up all those stale images you'll bust your image layer cache.

So my actual development script does this:

I also need to publish the :latest image. People running their own cyber-dojo server need a way to upgrade. And an upgrade needs a consistent set of image tags. So step 2) builds an image not only tagged to the git commit sha, but which also includes the full 40 character git commit sha as an environment variable (SHA) inside the image. This allows:

There are two ways to run your own cyber-dojo server:

We received this wonderful letter from James Turing of the Turing Trust.

We have also started a pilot programme working with primary schools. To date we have installed seven computer labs in primary schools. Each has 20 Mac Mini Computers running Linux Mint and loaded with educational resources using RACHEL. These computers have been received with great enthusiasm and are already having an impact on the way children are learning.

In other good news, I am pleased to update you on our progress since we were accepted to be the first Growth Leader for the Raspberry Pi Foundation’s Code Club International by the Raspberry Pi CEO Philip Colligan. Our first Code Club has been established at Robert Laws Secondary School in the Mzimba District, Malawi. The club currently has 28 members who have completed courses in SCRATCH and HTML with a couple of students learning C++ as well. You can hear the students talking about their experiences in Code Club in this video.

Thank you so much for your support of The Turing Trust that is vital in enabling us to make such an impact. 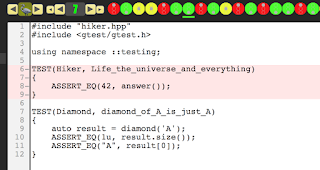